The Shortchanging of PA’s Students Leads to Deep Injustice

In The Leader Vindicator:

In 2015, Pennsylvania passed a Fair Funding formula. However, this formula only applies to funding added after the law’s adoption so that inequities are locked in. Because of the Hold Harmless system still in place, which guarantees that districts will receive at least as much state funding as they received the previous year, the formula deals with only 11 percent of the state funding of education and $1.2 billion worth of inequities are built in. In addition, Pennsylvania’s heavy reliance on local property taxes exacerbates disparities between high-wealth and low-wealth districts.

Category: Fair Funding in the News

If you would to support our fight for Fair Funding Equity, please consider a donation 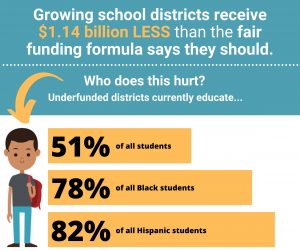